What does heaven look like? It must be the ultimate paradise, where beauty is ubiquitous and peace is undisturbed. One might envision a place that is full of nature's best offerings: sweeping green pastures, white-tipped mountains, crystal clear waters, and magnificent forests.

But if that is the case, then heaven is already a place on Earth: Canada. Contrary to what its epithet might suggest, the Great White North is more than just an expanse of snow—it encompasses all of the aforementioned wonders and more, making it as close to a picture-perfect utopia as it gets.

Still not convinced? See it for yourself to believe it:

Known as the Canadian Galapagos, British Columbia's Haida Gwaii is a scimitar-shaped archipelago located just below the Alaska panhandle.

It is the home of the Haida First Nations who have dedicated their lives to protect the ancient rainforests and endemic wildlife of the islands.

Hiking through its trails is a truly surreal experience, as the sounds of nature echo softly throughout the moss-covered wonderland.

A hidden gem within Waterton Lakes National Park in Alberta is Red Rock Canyon, a unique geologic formation that consists of red- and green-coloured bedrock layers.

The site is popular among daytrippers who often stop by to enjoy a midday picnic or explore the self-guided hiking trails.

To get there, travelers must embark on a 16-kilometer drive that is accompanied by breathtaking sights of hanging valleys, rolling meadows, and soaring mountains.

Located near the Saskatchewan-Montana border is the 70 Mile Butte, a 4.5-kilometer loop trail within Grasslands National Park.

Hikers are treated to some of the best sights of Canada's only national prairie park, which include wildflower-laden steppes, roaming bison herds, and prancing pronghorn antelopes.

The trail also leads to a 100-meter-tall hilltop lookout, which gives an unmatched view of the French River Valley.

Canadians may not typically associate Manitoba with hiking, but the province still has its share of trails that are worth exploring.

One of its best ones is the Bald Hill Trail in Riding Mountain National Park, which stretches 9.5 kilometers long. It leads to a literal bald hill made from layers of shale rock that have accumulated over thousands of years.

Standing on the bald hill can make even skeptics believe that heaven exists, with its scenic views of the park and the prairie lands in the far distance.

One of Canada's most prized destinations is the Bruce Peninsula, a natural wonder in Ontario that lies between Georgian Bay and Lake Huron.

The site is characterized by dramatic cliffs that overlook the turquoise waters of the bay.

Explorers can wander through the cedar forests atop the cliffs, take a dip in the beaches and coves beneath, or spend a night watching the stars at this designated dark sky preserve.

Quebec's version of heaven is found north of Quebec City in Saguenay-Lac Saint-Jean.

The site is home to a 100-kilometer-long fjord that was carved by glaciers during the Ice Age.

The world's highest tides were recorded at Burntcoat Head Park, a heaven-like landscape in Nova Scotia.

160 billion tonnes of water flow into the basin every 13 hours, which is a greater amount than the total combined flow of the world's freshwater rivers.

Visitors can discover the diverse species of ocean life left behind in pools of water along the ocean floor, as well as explore the three-acre park's walking trails and replica lighthouse.

St. John's world-famous Signal Hill is more than just a great view—it has a steep history of military and technological triumphs that remain an important part of Canada's past.

From the 17th century to the Second World War, Signal Hill was the central site of St. John's harbour defences. It was also where Guglielmo Marconi received the world's first transatlantic wireless signal in 1901.

Learn more about the town's rich heritage at the Visitor Centre, or embark on a coastal hike on one of the site's five panoramic trails.

The premier attraction of the village of St. Martins in New Brunswick is the St. Martins sea caves, a collection of caverns and arches along the ocean floor.

The caves become flooded with water during high tide, so visitors must wait for water levels to fall before exploring them.

But don't stay too long—the tide rises every 6 hours and 13 minutes, making the timing of every visit important.

Greenwich Beach may be the least-visited spot in Prince Edward Island's National Park, but that makes it all the more worth visiting.

The beach has the largest sand dunes on the island, as well as boardwalks and trails that traverse over the island's lush marshlands.

One of the best times to visit is in the evening when the sun is about to set—the rolling hills of the beach set against a changing ombre of orange-blue is truly a sight to behold.

It is the only place in the world that provides custom-made, heated outdoor viewing seats that swivel 360 degrees and allow views from all angles.

In cooperation with Aboriginal elders in the area, the village has been fitted with traditional amenities that elevate the indigenous experience.

Just north of the Arctic Circle is an oasis called the Bathurst Inlet, a tundra heaven consisting of colorful Arctic wildflowers and Caribou-occupied meadows.

One of the most popular tourist attractions in the area is Wilberforce Falls, the highest circumpolar waterfall at 161 feet.

Visitors can stay at the Bathurst Inlet Lodge where they can learn more about the site's unique geography and natural history.

At the border between the Yukon Territory and The Northwest Territories are the Selwyn Mountains, a rugged range characterized by glacial peaks, mighty plateaus, and U-shaped valleys.

The mountains are made up of sedimentary rocks from the Precambrian and Triassic Age, which were faulted and folded over hundreds of millions of years.

Some parts of the rock take on a bright maroon colour, which makes the mountains visually striking to look at. 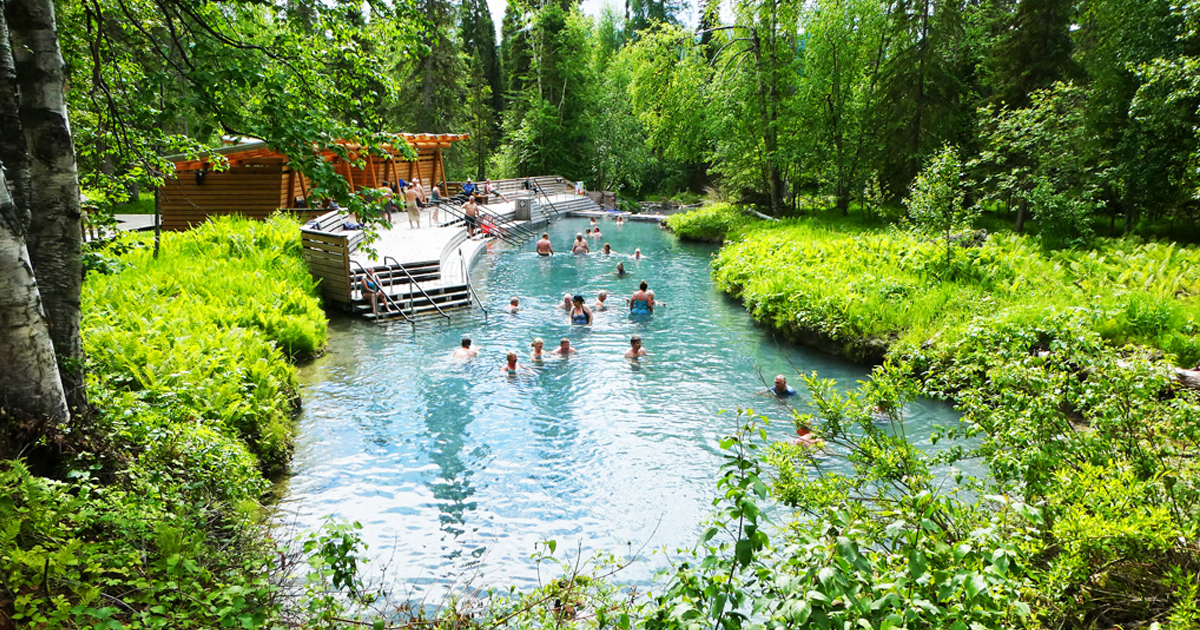